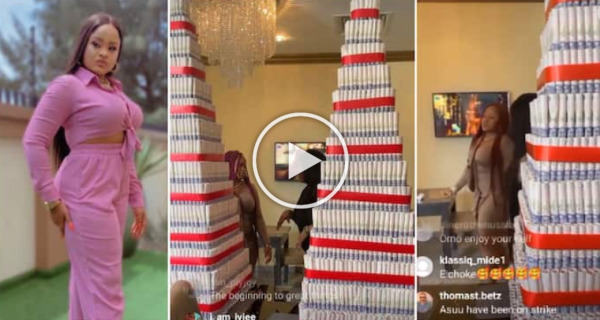 Evicted BBNaija Star Amaka Gifted 2 Huge Money Cakes by Fans. Evicted BBNaija Level Up  Amaka, seems to be enjoying her newfound stardom based on the support from her admirers. After receiving a nomination from her other housemates for instant eviction, the reality star was abruptly removed from the show.

In a recent development, the former roommate, who many fans felt was unfairly disqualified, went live on Instagram to show her the support they had given her.

Amaka danced joyfully while flaunting two enormous money cakes that her fans had given to her during the live event.

The 14-step-tall money cakes were built of crisp N500 bills. Amaka appeared to be very thrilled with the enormous show, which almost touched the roof.