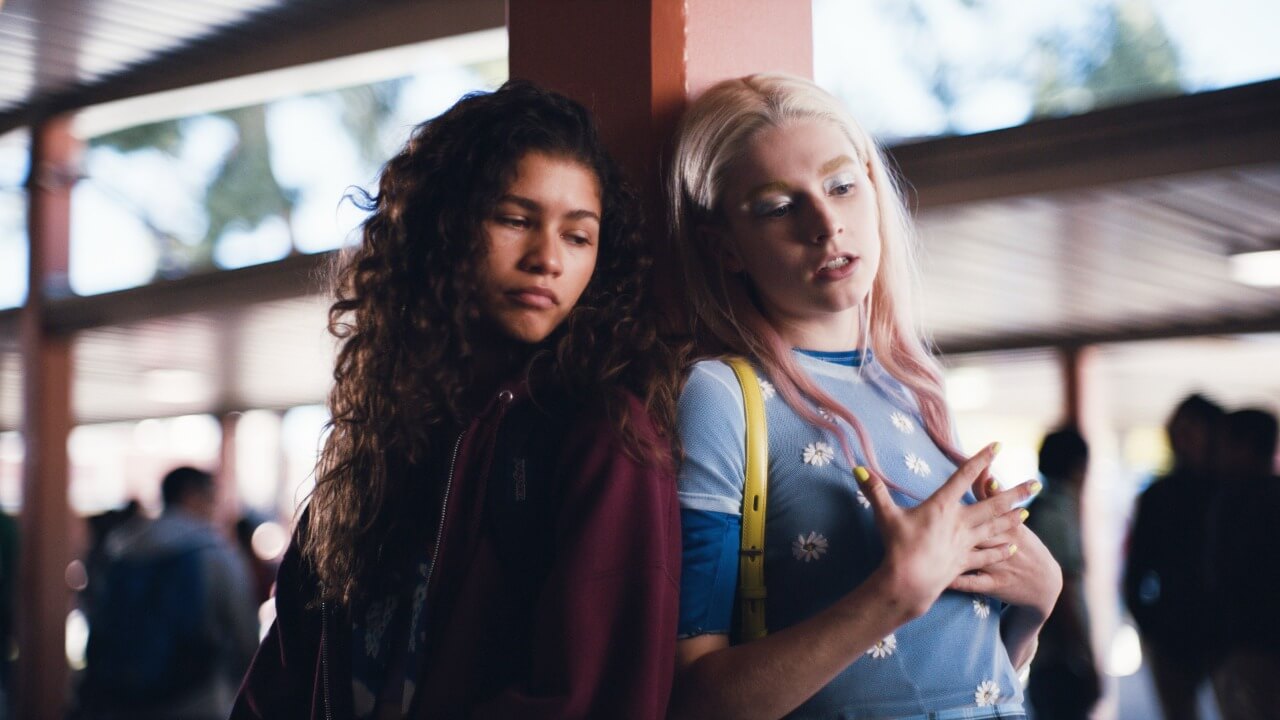 Euphoria is an American teen drama television series created and written by Sam Levinson for HBO. A group of high school students navigate love and friendships in a world of drugs, sex, trauma and social media.

An American adaptation of the Israeli show of the same name, “Euphoria” follows the troubled life of 17-year-old Rue, a drug addict fresh from rehab with no plans to stay clean. Circling in Rue’s orbit are Jules, a transgender girl searching for where she belongs; Nate, a jock whose anger issues mask sexual insecurities; Chris, a football star who finds the adjustment from high school to college harder than expected; Cassie, whose sexual history continues to dog her; and Kat, a body-conscious teen exploring her sexuality.

As the classmates struggle to make sense of their futures, the series tackles the teenage landscape of substance-enhanced parties and anxiety-ridden day-to-day life with empathy and candor.

Although there aren’t many shows that go as far as Euphoria, there are plenty of similar shows and movies that tackle issues of sexuality, violence, bullying, and the complicated feelings of teenage-dom.

You loved the gritty teen dramas and actions from Euphoria and you cannot wait to see the second season airing? While you wait, you can hop on the following shows that are just like Euphoria

Elite is a Spanish thriller drama web television series made for Netflix by Carlos Montero and Dario Madrona. It’s set in a fictional elite secondary school – Las Encinas and revolves around the relationship between the 3 working-class students who enrolled with the scholarship and their wealthy classmates.

The class difference between them caused a natural enmity and in no time, this enmity in no time lead to kidnapping and murder. You cannot afford to miss Elite series showing on Netflix.

Although a bit old, Skin is an evergreen series. Skins is a British teen comedy-drama television series that follows the lives of a group of teens in Bristol, southwest England, through two years from Level 6.

Just like Euphoria, Skin depicts the typical high school teen and doesn’t hold back when it comes to showing the dark and scandalous sides of teens and their high school experiences. Her controversial storylines explored issues such as dysfunctional families, mental illness (such as depression, eating disorder, post-traumatic stress disorder, and bipolar disorder), adolescent sexual activity, sexuality, substance abuse, death, and bullying.

Sex Education is a British drama-comedy TV series created by Laurie Nunn. The series was premiered on 2019 January 11 on Netflix. In this show, Asa Butterfield was starred as an insecure teenager and his mother as a sex therapist. Having gained over 40 million viewers after its debut it became a critical and commercial success for Netflix.

While Euphoria was more serious, Sex education on the other hand was a comedy sitcom centred on a high schooler, Otis who was the son of a sex therapist and happens to be a virgin and has not much interest in sex stuff. He found friendship in Eric who is also a virgin but was the opposite of Otis as he is obsessed with sex and sexual adventures. As the plot develops, Eric’s obsession pushed him to team up with Mave, a female classmate and they both set up a secret sex clinic for teens like them.

I Am Not Okay With This

I Am Not Okay with This is an American coming-of-age black comedy streaming television series, based on the comic book of the same name by Charles Forsman.

A teenager navigates the complexities of high school, family and sexuality while dealing with new superpowers. She discovers she has superpowers and she was not okay with it.

Sharp Objects is a 2018 American psychological thriller television miniseries based on Gillian Flynn’s 2006 debut novel of the same name.

Camille, a young reporter with a drinking problem returns to her hometown to investigate the murder of a young girl. Discover all Camille found and did while solving the murder

The Society is a mystery American teen web drama television series created by Christopher Keyser and premiered on Netflix on May 10, 2019.

The society follows the story of the group of teenagers who must run their community after the rest of their townspeople disappear mysteriously. The mystery begins when local high school students return early on a canceled field trip and discover that everyone is gone.

Awkward is an American teen comedy-drama television series created by Lauren Iungerich for MTV. The show’s central character is Jenna Hamilton (Ashley Rickards), a Palos Verdes, California, a teenager who struggles with her identity,

An unpopular 15-year-old gains immediate, yet unwanted, popularity at her high school when the student body mistakes an accident she has for a suicide attempt because she had received a harsh “care-frontation” letter suggesting ways on how she could be less unpopular.

Think of an animated version of Euphoria. Daria is the comedy sitcom anime series that depicts the life of an American teenager, Daria Morgendoffer who observed the word in a smart and aerobic way alongside her best friend, Jane Lane.

A smart and cynical girl goes through teenage life as a proud outsider in a world of mainly idiotic adolescents and condescending adults.

The End of The F***ing World

A budding teen psychopath and a rebel hungry for adventure embark on a star-crossed road trip in this darkly comic series based on the award-winning comic book series by Charles Forsman.

Alyssa, bored and skeptical of normal people, targets James, an outcast, to be her new boyfriend. Unknown to Alyssa, James thinks he is a psychopath and actually plans to kill Alyssa. Was James able to pull through? What other things did they encounter on the road trip?

Misfits is a British science fiction comedy-drama television show, on E4, about a group of young offenders sentenced to work in a community service programme, where they obtain supernatural powers after a strange electrical storm

Misfit is a break from the everyday drug and sex and modern teenage exuberance. As luck will have it, Five teenage offenders acquired super powers during an electrical storm that happened. Watch how these offenders struggle to keep a hold of their life and also find their original abilities.