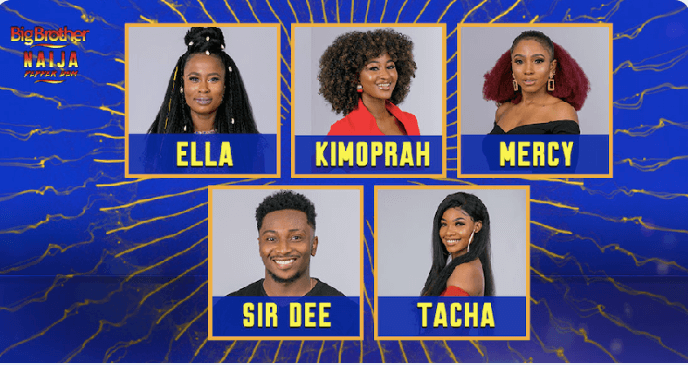 5 Housemates Are Up For Possible Eviction, after been nominated by their fellow housemates. Here is a breakdown of how the live nomination went and who nominated who.

Note that Nelson was not nominated because he is this week’s Head of House which automatically makes him immune to nominations.

The five housemates with the highest number of nominations were Tacha, Sir Dee, Ella KimOprah and Frodd.

But Frodd who won this week’s Veto Power Game of Chance (means that he has the power to save a nominated housemate and replace such housemate with a housemate that is not nominated) saved himself and replaced with Mercy.

So who are you going to be voting for in this weeks poll, Is it going to be Tacha, Sir Dee, Ella KimOprah or Frodd. Vote below and invite your friends.

REFRESH PAGE TO VOTE MORE: You can vote as many times as you want, all you just have to do is refresh this page or close and reopen it