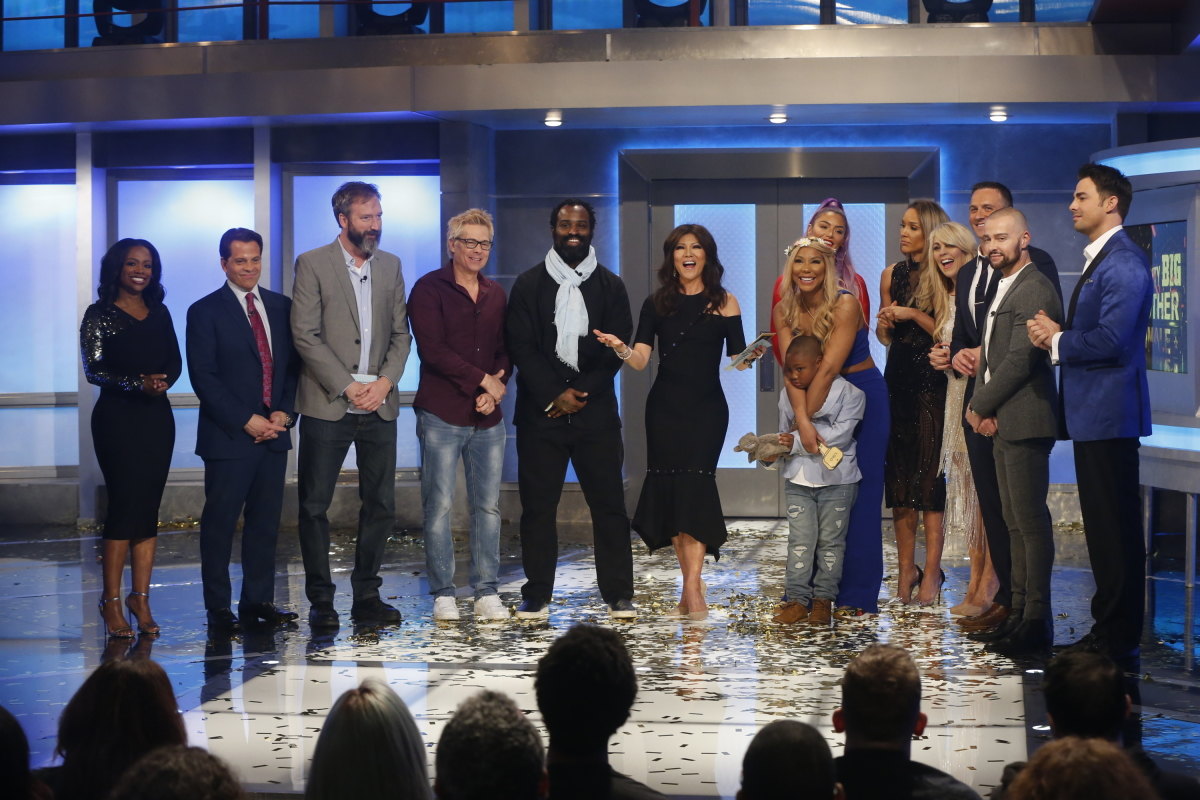 The show premiered on January 21st, 2019, and concluded on February 13th, 2019 following the success of Celebrity Big Brother USA first edition. This season had 12 houseguests ( one more than the first season’s houseguests).

The season saw the first-ever African American win the Big Brother show during the live finale and secured the grand prize of $250,000. Twelve celebrities were admitted into the big brother’s house to compete for the grand prize. Let’s get to meet them and see more information about celebrity Big Brother Season USA 2 houseguests.

Anthony is an American financier who served in the white house as the director of communication from July 21 – 31 2017. There were speculations about him before the show started, but when it did people started to like him and didn’t think him as much of a bad character anymore.

Although he lost the first game and was up for eviction he left before time leaving everyone stunned as to what happened. It later revealed that he was a fake houseguest. He didn’t reveal much during his stay but he did say his strategy was to stay sober and listen.

The popular momager of the young star Lindsley Lohan. She is also the mother of Alina, Dakota and Michael Jnr. Lohan. Dina went into the show with no knowledge about the game but still somehow ended up a fan favorite and lasted till the very end before she was dumped over Tamar by the HOH who had to carry his ally to the final and evict Dina.

” I didn’t know the show so I went in there not expecting anything. I just went by myself and stayed true to my heart. I got to know everyone in the house and tried to break up people that were getting upset with each other and try to be like the calm in the storm”.

Brian Gerard Kaelin, popularly known as Keto Kaelin is an entrepreneur, actor, TV host and radio personality. He is most notable for being a witness in the O.J Simpson murder case. He was a little bit funny in the house and tried to play it cool with other houseguests, but was unfortunately voted out during an eviction show.

“My strategy is just being me, I think that’s my strength”. He claimed to come in prepared as he has been a house guest before and has lived with celebrities before which help him understand the game more.

Lolo is an American athlete who specializes in 60 meters and 100 meters hurdles. She won indoor national titles consecutively from 2007 to 2009. She is a Brakewoman on the US bobsled national team. Prior to the final episode, Lolo scored the golden power of veto medal, which saw her to the finale.

During her stay in the house, she had rough times and nearly got physical with houseguest Tamar Braxton.

“My strategy would continue to evolve as I continue to understand more about the game and players. Wherever you go into a race, you can calculate all you want but the race would always change depending on the environment and who you are competing against. I will try to be as fluid as I can and be calm so as not to be easily offended”.

A professional host and actor, Johnathan has hosted shows like Halloween wars, cake wars. He started acting in the early 2000′ and appeared on shows like Mean girl, cheaper by the dozen 2and many more. Jonathan was nominated after losing the HOH competition to Ryan, then went on to form an alliance with the females in the house hoping to save himself. This was still not enough as he and his allies were shocked when he became the first celebrity to be evicted from the house in the second season.

“Trying to keep myself occupied for days and not get stir crazy while also not annoying all the other houseguests.  I have a ton of energy and I’m always on the go having adventures, so I’ll need to figure out ways to keep myself busy and not drive anyone nuts’ ‘.

Kandi as she is popularly known, is an actor, a performer, businesswoman and television personality. She was part of the female vocal group Xscape in 1992, and won a grammy award in 2000 for her contribution to the song “No scrub”.

Kandi made it to the final five featured in the final episode of the season. She was the most nominated houseguest for eviction this season but somehow seemed to escape each time until she tied votes with fellow eviction nominee Dina and was sent packing by the HOH Ricky.

When asked about how she felt about the HOH choice to evict her over Dino she replied; “I’m definitely not happy, but I’m not holding any grudges about this game. I honestly didn’t think I was gonna make it this far. I was just trying not to be kicked out the first week because my family said they were going to roast me if I did”.

Ryan Lochte is the second-most decorated Olympic swimmer in Olympic history only behind Micheal Phelps in terms of medals. He currently holds the record for 200 meters individual medley (short and long course).

He was the first HOH this season and was forced to nominate more than half the houseguests which saw his closest ally bow out of the game. This caused a huge stir and confusion leading to the other houseguests backdooring him and seeing him become the second houseguest to be evicted from the house.

When asked he said he didn’t really have a strategy but would be himself all through and keep his eyes on the prize.

An actor, producer, singer, songwriter and even a game show host, Joey is best known for his character in blossom, Melissa & Joey, Gimme a Break brotherly love with his real-life brother, and other minor movies some of which he produced.

He was evicted in the third evictor show and didn’t really play much of a strong character during his time but believed in faith, not fear.

Natalie is a former WWE professional wrestler, actress, model and fashion designer. She is best known as Eva Marie during her spell at WWE where she gained fame and earned some titles. She was among the houseguests of the celebrity big brother USA season 2 where she was the 5th celebrity to be sent packing from the show.

“Try to stay under the radar and keep my competitiveness under wraps for the first couple of challenges”.

Tom is a Canadian actor, rapper, comedian and filmmaker. He gained mainstream dominance through his shock comedy show The Tom Green Show (1994-2000). He has also done some big films like Charlie’s Angel, Road trip and Stealing Harvard and was previously married to actress and co-movie star Drew Barrymore.

Tom became the first Canadian to be featured in the celebrity big brother USA house and was quite the strong competitive character while in the house. He admitted that staying away from friends and family would be tough for him in the house.

He made a team called tomato alliance with fellow houseguest Keto Kaelin which they actually did well together in competitions. His downfall came when Buress was HOH and put him for eviction.

“I always said when I went in that I wanted to make it halfway through. Being somebody who enjoys a good story, I enjoyed a good beginning, middle and end to the things”.

Ricky is a former running back who played 11 seasons in the NFL and 1 season in the CFL. He dominated throughout the game posing as one of the most competitive houseguests and winning the final two HOH challenges. He even won the final veto power and saw himself in the final but couldn’t seal it all as he did not get a single jury vote and lost to Tamar as first runner up for the second season of Celebrity Big Brother USA.

He had alliances in the house with Lolo and Natalie and even finalist Tamar forming bedroom alliances. He also said he tried to make himself interesting enough that they would all want to stick around him which along with his competitive spirit helped him reach the peak of the game.

Tamar is an American singer and television personality. She previously faced multiple health issues publicly and a heartbreaking split from her ex-husband and co-star Vincent Herber. She was also fired from the Fox talk show “The Reals”.

All this seemed to be very rough times for her and was a surprise when she was announced as Celebrity Big Brother USA season 2 houseguest. She emerged the winner going home with the grand prize of $250,000.

“I am a huge fan of this show, and I played the game to the best of my abilities. I lost my job publicly in front of everybody, I lost my husband and almost lost my life, but I still played with strength and empathy to make sure I did things right”. She told the jury before casting of final votes which helped her finish as the winner ahead of fellow finalist Ricky Williams.