BBNaija Reunion day 10 started off with Ebuka digging into Esther’s love triangle with Nelson and Frodd.

Diane and Mercy pulled receipts incriminating Esther in a ring of manipulative behaviour while in Big Brother’s house.

The best friends who admitted to being former friends with Esther pointed out Esther’s transfer of emotions from Nelson to Frodd despite knowing Diane had a thing for Nelson, as an act of betrayal.

Venita Speaking on “Esther and Frodd” kiss said she felt the kiss fell from heaven and Esther cut in to set the record straight about the whole kiss drama.

Esther denied kissing Frodd and claim it was a group agreement. According to her, Frodd kissed her and not the other way round.

“For the records, that kiss was a group arrangement. The kiss came from Frodd.” -Esther

#BBNaijaReunion I didn’t kiss Frodd, it was him that kissed me – Esther. Hmmm, the flashback video says otherwise o pic.twitter.com/bQqcGPTKmQ 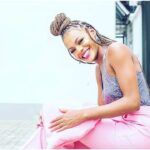