Last night, we got to understand that the pepper from day 6 was nothing. It came with Alligator Pepper. Viewers were entertained with epic battle of words between Mercenaries Mercy and Omashola the Warri Mopol.

Ebuka asked Cindy if she was a gossip. Cindy said No. Ebuka went ahead to tell her there were situations, Cindy stood her ground. Seyi came in and told it to her that he as a person have caught her several times gossiping. Cindy went on and on about how she was only having conversations at the instances being given. At the end of it all, all the ex-housemates agreed she was a gossip either she admits it or not.

According to Ebuka, Frodd might happen to be the most gossiped by guys in the house. With this, Ebuka asjed Seyi if Frodd was a gossip also. Seyi said Yes in affirmation. Frodd was actually cool amidst the whole talks.

The trouble started when Ebuka asked Omashola why he was gossiping Mercy to Seyi, Ebuka played the clip. The clip was one of a time while in the house, Omashola was seen spewing his anger towards Mercy to Seyi. He was reporting about how Mercy has a vain pride, always claiming no one in the house is on her levels outside the house.Also, that mercy is a runs girl, to imagine she is a video vixen at that. He equally reported about Mercy’s actions and words at the times 2face and Don Jazzy came into the house. Talked about how Merc

Omashola defended himself and explained that the reason he had that conversation with Seyi was because he was pissed at an issue he had earlier had with Mercy. The issue being that at a time, Omashola claimed he had walked in on Mercy and Ike in the bathroom naked which he had to jokingly throw a pack of condoms at them. This didn’t go well then.

Although, Mercy countered that she wasn’t naked as she had her swim suit on. This, according to Omashola was why he was pissed at Mercy that day which he had to go vent his anger to Seyi.

Things got tensed as Mercy metioned that she is also aware Omashola severally called her a prostitute in the diary room with Big brother.

This sparked the whole drama as Omashola denied that he had never directly called Mercy a prostitute to anyone. Mercy stood her ground that he did it.

At a time in the exchange of words, Mercy slapped Omashola hard on his chest, the slap made him stagger and he hit the lamp between him and Ebuka.

Other housemates stood up and did their best in separating them.

Ebuka who is confused and at loss of words from the whole drama gave Avala the responsibility of helping him out. Avala calmly explained that with all evidences, it is apparent that Omashola take responsibilities for his actions and duly apologise to Mercy for slut shaming.

Seyi chipped in that what Omashola did was wrong that it is never right to slut shame a woman.

While Omashola was taking so long to apologize by giving excuses of being pissed, Esther screamed at him to apologize already and stop taking long. Omashola shouted back at her to mind her business because it is a matter between himself and Mercy.

Omashola apologized to Mercy right there and Mercy in return apologized for her actions on the show last night. While rounding up the show, Omashola begged Mercenaries not to come to his DM, as it has become an already forgotten issue and that he and Mercy are very good friends. 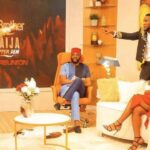