Hey there! it seems you are here because you missed yesterday’s edition of the BBNaija reunion. Oh yeah! my guess is right. Don’t worry, I’ve got you covered on all the fun and emotions you missed

With Ebuka as the ever-ready host, lots of spurs were rolled out for us yesterday night. 10 ex-housemates were present physically while Three of them, Thelma, Gedoni and Joe joined virtually.

The most exciting drama of the show was the session when ex housemates were asked to name the housemate with the highlights.

The Awolowo boy went for everyone on the show. Joe picked Tacha, Cindy and Omashola picked Mercy, Mercy picked herself, Ike and Tacha. Mercy claimed that her being the highlight wasn’t an intentional act, rather it is just who she is, “Cause when Mercy coughs, it’s highlight“

Tacha, said no one could have intentionally won that cause there were cameras everywhere, so making it a conscious effort to be the highlight every time was going to be pretty difficult. Wow, very reasonable reply Queen Tacha!

Currently, the main highlight battle is among Omashola, Mercy and Tacha.

Moving on, Ebuka relished on the ex-housemates answers to ‘who they feel had no business been in the house in the first place’.

Seyi explicitly explained that He picked Diane for that because he feels if the “Diane of AFTER the House” was the “Diane of IN the house”, she would have been a threat to both Mercy and Tacha. But, he still got her back come anytime. Esther went for Thelma which Thelma gave her a silencing clap back for. Venita said she guess it is everyone who wasn’t in the house when she joined. Tacha said everyone who got into the house definitely had a business in it.

Moving on, Ebuka relished us with the ex-housemates audition experiences

Mercy claimed the audition that got her in was her fifth one and that she kept coming back cause she was convinced BBNaija is the platform for her dreams to come true.

Frodd revealed that even after his status as an ex-housemate, he still tells people they need connections to get into the house

Seyi confirmed that Audition was pretty easy for him and that he is unbothered about being accused of always throwing the Awolowo Grandson card. This is because it doesn’t only paves way for him both before and during the house, it also reminds him of the son of who he is and that’s what keeps him in constant check.

Tacha took a bit to explain her ordeal when she was being slut shamed by co-contestants at the audition which made her viral already. She is however glad that, those who were slut shaming her are the ones who got to sit down at home to watch her in the house.

A take home gist, go check out Venita’s appearance. So lit! she came with the real pepper yesterday. 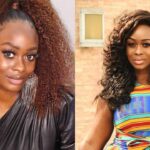