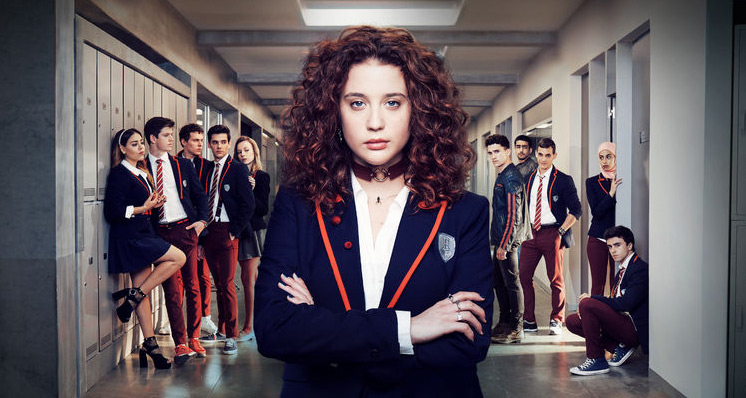 Elite is a Spanish thriller drama web television series made for Netflix by Carlos Montero and Dario Madrona. It’s set in a fictional elite secondary school – Las Encinas and revolves around the relationship between the 3 working-class students who enrolled with the scholarship and their wealthy classmates.

Elite is primarily the teen drama but with more progressive issues and other sides to its cliches such as diverse sexual themes. The series is structured as a multi-timeline plot with each season taking in 2 timelines and employing the flash-forward plot with some mystery elements.

The story is centered around 3working-class teens who enrolled with scholarship and their wealthy classmates attending an entirely expensive school in Spain. The class difference between them caused a natural enmity and in no time, this enmity leads to Murder.

If you loved Elite, then you’re probably looking for an emotional, captivating show filled with twists and turns and an in-depth drama that includes love, jealousy, education, crime, sex, and thriller. For your further cravings, here is a list of top shows like Elite you can watch

13 Reasons Why is an American teen drama streaming television series developed for Netflix by Brian Yorkey, based on the 2007 novel Thirteen Reasons Why by Jay Asher.

13 reasons why is one exclusively tragic series that centered around a high schooler, Clay Jensen as he returns home from school to find a mysterious box with his name on it lying on his porch. Inside he discovers cassette tapes recorded by Hannah Baker—his classmate and crush—who tragically committed suicide two weeks earlier.

Although a bit old, Skin is an evergreen series. Skins is a British teen comedy-drama television series that follows the lives of a group of teens in Bristol, southwest England, through two years from Level 6. Her controversial storylines have explored issues such as dysfunctional families, mental illness (such as depression, eating disorder, post-traumatic stress disorder, and bipolar disorder), adolescent sexual activity, sexuality, substance abuse, death, and bullying.

Skin depicts the typical high school teen, both the bad and the ugly. The show was created by father and son TV authors Brian Elsley and Jimmy Britten for the company’s photos, and premiered on E4 on January 25, 2007.

Sex Education is a British drama-comedy TV series created by Laurie Nunn. The series was premiered on 2019 January 11 on Netflix. In this show, Asa Butterfield was starred as an insecure teenager and his mother as a sex therapist. Having gained over 40 million viewers after its debut it became a critical and commercial success for Netflix.

Sex Education centered on a high schooler, Otis who was the son of a sex therapist and happens to be a virgin and has not much interest in sex stuff. He found friendship in Eric who is also a virgin but was the opposite of Otis as he is obsessed with sex and sexual adventures. As the plot develops, Eric’s obsession pushed him to team up with Mave, a female classmate and they both set up a secret sex clinic for teens like them.

Get Even is a British teen thriller series that premiered on BBC iPlayer on 14 February 2020. The series was adapted by Holly Phillips from the book series Don’t Get Mad by Gretchen McNeil.

For the love and passion for justice, Kitty Wei, Bree Deringer, Margot Rivers and Olivia Hayes formed a gang called Don’t Get Mad, (DGM) in order to expose bullies in the school. However, things took a different turn when one of their next targets was murdered holding a paper with DGM boldly written on it. Somebody is definitely trying to frame the girls for murder!. Find out who on Netflix Binge.

The End of the F***ing World

Discover the teenage lives of James and Alyssa; two problematic teenagers who have never been able to make friends or relate to anyone else in their lives. James has always considered himself a psychopath with the ability to commit cold-blooded murder.

He initially chooses Alyssa to be his first victim, but soon the two of them find camaraderie in each other and set out on an adventure together. As they both tour England via a road trip, the two of them leave a trail of violence and murder.

In this Spanish drama and crime series, Hugo Beltran, a male stripper sets out to prove his innocence for a crime he didn’t commit and was unjustly incarcerated for seven years earlier.

He decided to use the waiting period to prove that it was his lover who framed him up for her husband’s death. Will Hugo be able to unravel the mystery behind his setup?

The Society is a mystery American teen web drama television series created by Christopher Keyser and premiered on Netflix on May 10, 2019. Although a second season was planned, the series was canceled after one season as a result of the COVID-19 pandemic.

The society follows the story of the group of teenagers who must run their community after the rest of their townspeople disappear mysteriously. The mystery begins when local high school students return early on a canceled field trip and discover that everyone is gone. A dense forest appears surrounding the city. It appears that the outside world no longer exists and cannot be contacted over the phone or the Internet. Teens must come up with their own rules to survive with limited resources.

Riverdale is an American teen action series based on the characters of Archie Comics. The series was adapted for The CW by Archie Comics chief creative officer Roberto Aguirre-Sacasa and is produced by Warner Bros and CBS Television Studios, in collaboration with Berlanti Productions and Archie Comics.

The show follows Archie Andrews’ life in the small town of Riverdale and explores the darkness hidden behind its seemingly perfect image. It depicts various incidents that happened in the town of Riverdale between different time frames and the friendship, love, tragedy, and crime between the friends of Archie, in a beautiful way that you will surely love.

Euphoria is an American teen drama television series loosely based on the adaptation of an Israeli show of the same name. The series centers around several teenagers and their major problems in life which range from addiction to coming to terms with their own sexual orientation

Rue, the central character of the story, is a drug addict who keeps going back to rehab. Her friends include homosexuals who are still struggling to come out, misfits who cannot fit into the college circuit, and body-conscious teens trying to wrap their heads around their own sexuality.